We had our first agency-led audition last week.  That was fun - I got a phone call at half past ten in the morning, "can she go tonight?"  For a bit before 5pm right in the centre of Manchester!

Short notice, or what! Especially as Tiddler was in school until 3:30, and factoring in rush hour traffic, it gave me about 20 minutes of her at home to get changed out of school uniform and run through the lines we'd been sent.

It was for a commercial, of course.  Who else works at such short timescales.  And the lines?  Not language I'd expect of a 5 year old!  Not rude, I should say, just... odd...   I don't know what the scriptwriters were on, but one phrase they used I'd never heard before, and nor had google, which says a lot.

Another spanner in the works was having to drop Big Brother off at college on the way for his evening class.  It's only a short distance away, but left me in an awkward place for getting to the audition, given the traffic.  I tried heading up Deansgate, but got caught out by the new arrangements up near Victoria - straight on now goes direct into a car park!  I considered just parking up and walking from there, but £6.50 minimum charge?!  It took a three-point turn to get out, and I wasn't the only one to make the mistake - the two in front and two behind me did the same!

Anyway, we fought our way around the Inner Ring Road, and ended up parking in the Arndale multi-storey.  £4 for two hours - still feels a lot, but not quite so bad.   We found the lift, pressed the "down" button, and eventually a lift arrived.  "5^" the indicator said.  "Lift going up" the automation said.  So we waited for the next one.  The light went out, the doors closed, and the lift went down!  Gah!

I hate driving in rush hour when I'm on a time limit!  I hate lifts that lie to you.

So we rush down the stairs instead, dash through the Upper Mall and out onto High Street, and quickly across to the dance studios where the auditions were taking place.  And more stairs to climb!  Anyway, we get there just about on time, I think.

Then the calm... a nice wait in a room full of anxious little girls, fretting parents, and noisy siblings, while seen kids left and new ones arrived!  Eva-Jane immediately made a friend, of course, (Hi Xanthe!) and they spent the waiting time playing noughts-and-crosses on her mother's iPhone.

It was interesting to note how much, or how little, preparation some parents had done - at least one child was still in school uniform.  Come on...

The trip home was a good deal calmer...   A call in at McDonalds as a treat for doing well, and we were home in plenty of time for bedtime!

I've got fingers crossed, but I'm not pacing anxiously waiting for the phone call - they were seeing a lot of kids there, and I've spotted notices of auditions for what looks like the same thing elsewhere in the country. I'd be fun if they pick her, and she'd love it if her friends see her on the telly, but we're not deluded enough to think she's got it in the bag just yet!

Thanks to TSA for sending us, and here's hoping for the next one !
Posted by Rob at 10:27 No comments:

Let the work flood in...

However, agency representation kicks in tomorrow and the spotlight CV seems to be live now. We'll have to see what happens!  Contact details are now on the website, if you are looking for a cute child actor!

In other news, we've now got rather more hamsters than I am thinking is sensible: the sound of wheels is getting deafening! Oh, and school starts again on Wednesday, and it can't come too soon!  Year 1 beckons...

Fun in the sun

We must be mad!

A 300 mile round trip, braving the roadworks on the Birmingham bit of the M6 in the morning rush hour, but dodging a string of accidents on the way back.. (We avoided most of them using the M1/A50 route..)

All so we could enjoy the sun in an outdoor play area of a Northampton primary school! 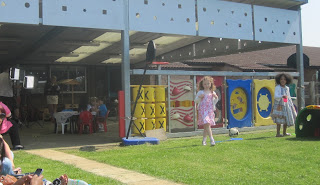 Eva-Jane instantly made a friend and spent most of the rest of the day playing with her - they even did some of the running-about shots holding hands!

This was just an 'extras' role, but good fun, excellent experience, and she got to record some song lyrics independently; we'll see how much appears on the final product - once that's released we'll add a link and say a bit more about what went on.

Thanks to all involved. We had a great day - well worth the travelling.

It's been a bit of work, lots of messing about with PHP, CSS, Smarty and Javascript, plus more than a little work finding photographs and capturing stills from videos, but I think it's been worth it. Eva-Jane has a new website! The simple holding page that has been there since she was born is now consigned to the digital dustbin, and instead we have a flash (but not Flash) new website showing off her talents..

Obviously it's going to be a work-in-progress for some time to come, and we always appreciate comments, but I think it's going to work..

We hope you visit.. 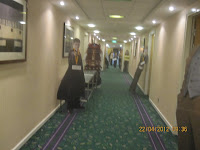 Pass between the (cardboard) stars to reach your dreams... Although I'm not quite what sort of dream involves Daleks, or if we'd want that sort at all..

It was actually, of course, to reach the Stagecoach Agency registration day... An audition, photoshoot, and promo DVD to watch! I think we were first there, and were greeted personally by the Managing Director! I hope this bodes well.

From a parents point of view, it's a tense time, hoping that your little one remembers their presentation, doesn't fumble their lines and doesn't roll about on the floor while waiting for their turn with the photographer...

She came out saying she'd done really well, and had even sung them a song. Nothing we'd practised of course.. I hope they appreciate her spontaneity and inventiveness! 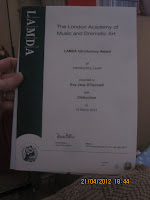 And here's the final result!

And here is the official version :-)
Click the picture.. 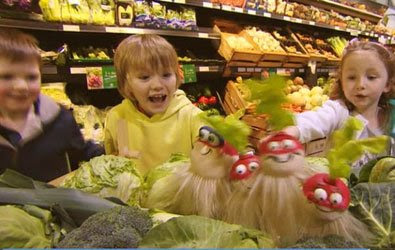 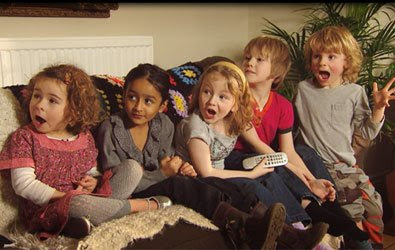 Email ThisBlogThis!Share to TwitterShare to FacebookShare to Pinterest
Labels: CBeebies 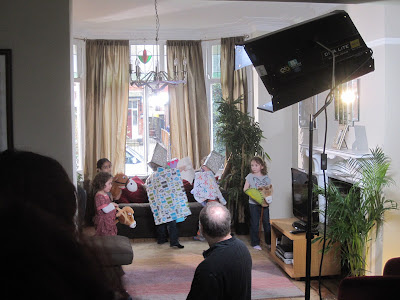 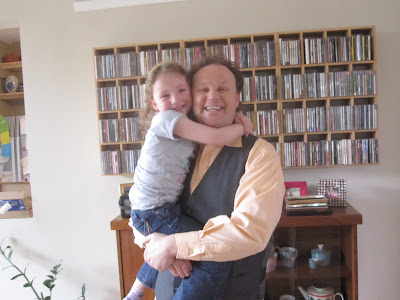 The slight pain caused by tripping over the foot of a light was quickly cured with a hug...

Yes, the surprise of the day was a visit from Justin Fletcher MBE. I'm not sure how they managed to get any of the kids to do anything after he walked in!

Up close and personal with The Wee MacGregors 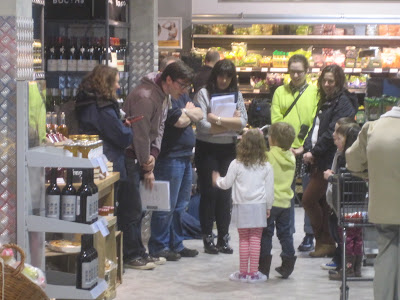 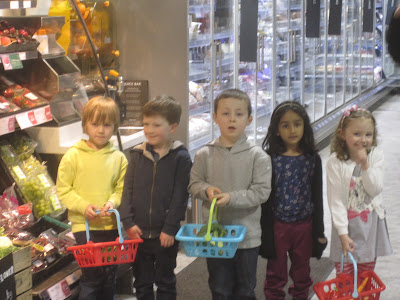 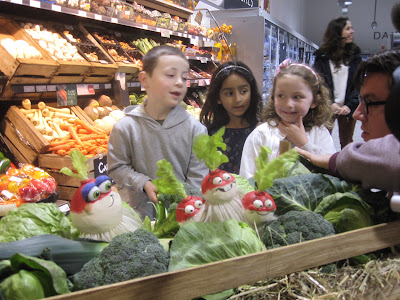 Filming at Booths supermarket and finding a surprise waiting in the Veggies basket!

A fantastic fun afternoon; watch out for a cameo appearance from Dad!

The Weekend Song, on-screen on CBeebies from April..