Exactly a week ago, we received an email out of the blue from "a Liverpool based theatre and film company", offering Eva-Jane a "lead role" in a film they are entering in the Virgin Media Shorts competition.  It was unpaid, but filming locally, so next to no travel involved, and they seemed a little desperate, so we decided we'd go for it.  The agency seemed to think it was a good idea too. "No time to audition!" Gulp..

It was a bit touch-and-go getting the licence arranged, but thanks to the instantaneous nature of email, a supportive school, some presumably polite persuasion, and a dash up to Swinton with some original photos and paperwork, it was sorted out by Friday morning.  Many thanks to Sue @ City of Salford for being so accommodating.

So.. Today it was filming. 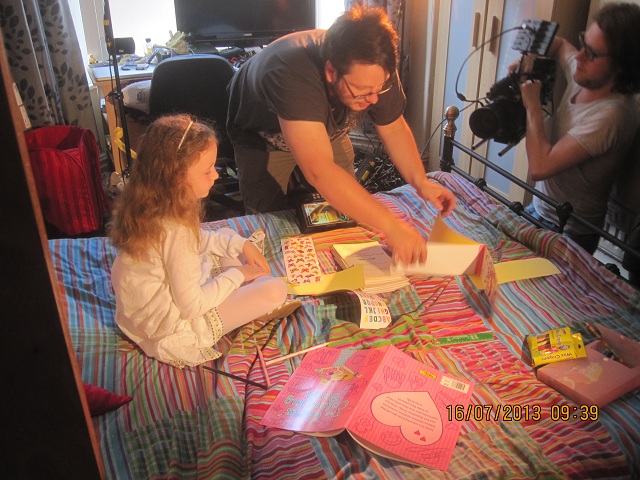 It was great fun.  The film follows the story of a little girl making her own mark on her big sister's Big Day.  We had some great feedback on her acting ability (modesty forces me to omit it, but it was good) and everybody seemed to love her.  Now we are desperately looking forward to seeing the finished product!

Many thanks to Karl, Tom, Dan, Sarah (Oh god, I hope that was her name; I'm dreadful with names...) and everybody else involved for making it a great experience, and we wish them best of luck in the competition.
Posted by Rob at 22:43